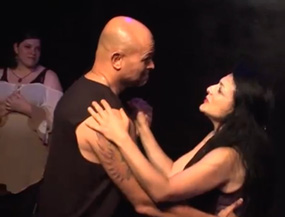 How would you like to have your Guardian Angel and The Maker of Heaven and Earth land in the middle of your crisis and bring you through it and Home? The Prodigal Daughter, the female perspective of The Prodigal Son, written and composed by Doreen Firestone, brings the trials of the daughter’s journey home to forgiveness alive, complete with the appearance of her Guardian Angel and God. This unique depiction of a woman’s struggle to heal her past, combines uplifting scripture with hilarious moments in the prodigal daughter’s life.

The Prodigal Daughter stars Ms. Firestone, NYC stage actress and operatic mezzo soprano, as the title character and features Sarah Sutliff as her Guardian Angel and Peter Quinones as none other than the Maker of Heaven and Earth. The program consists of the performance, which runs about 70 minutes, followed by a short testimonial by Doreen of her journey from childhood abuse and alcoholism, to meeting Jesus in her struggle and using her art and history in helping others.

To see more clips of The Prodigal Daughter Show check out the Media Page!

“BROADWAY AND BEYOND” Songs and Arias

“SAINT KATHARINE DREXEL –  MOTHER AND SERVANT OF ALL RACES”